Transition Bournemouth were out in force this weekend counting the carbon emission savings from Bournemouth residents.

We took part in the Winton Carnival Parade with our live human counter and talked to the spectators along the route.  We invited them to choose one or more sustainable activities like riding a bike, taking public transport, or growing their own fruit and vegetables. Each activity had a numerical value attached to it representing the amount of CO2 equivalent they could be saving over a year. People signed up with us on the day telling us about what they do that counts, and they also signed up via Facebook, Twitter and the Count On Me website.

The total count for the day was a saving of 36,890kgs CO2; this would be like filling the Bournemouth balloon four times over. Amongst those who signed up were people who holiday at home in the UK, those who don’t have a car, and vegans and veggies who don’t eat meat, each doing their bit and being counted.

It was a fantastic day and the response from the public was extremely positive, that together we could make a difference and have an impact on climate change, and begin to adjust our lives to become less reliant on fossil fuels.

Transition member Angela Fendley designed the Count On Me campaign whilst studying at the Arts University Bournemouth. She became involved with the Transition movement locally after becoming aware of their activities during research for a second year project, which took her to the Slades Farm Community garden for a wildlife survey. This research informed her work ‘Natural Colours’ which provides a contemporary look at the colours of the wildlife in the local area.

Angela became increasingly interested in the activities of Transition in Bournemouth and how they go about reducing the impact of climate change. So for her third year project she set herself the brief to design a communications campaign for the general public on how to live more sustainably and how to reduce one’s own personal carbon CO2 emissions. The aim was to not scare people about the enormity of the problem, but to provide simple activities that they could achieve. The Count On Me collective counter makes it measurable so they can see that their actions do have a positive impact.

With support of the Transition Bournemouth members and in collaboration with the BH Green Group Count On Me was launched as a community campaign for the Winton Carnival.

We will keep adding to the counter and you can come and talk to us about it at the Slades Farm Festival on Saturday 10th July. This will be a great opportunity to have a look around the Slades Farm Community Garden. This successful Transition project has been going since 2012  and runs regular conservation sessions open to all.

Don’t forget to visit the Count On Me website www.countonme.today to sign up and be counted. Any activity where you reduce your carbon emissions is helpful.  Please tell us about it #CountOnMe to be counted!

Thank you to everyone who came along to our fab Bournemouth Repair Cafe this morning in Churchill Gardens, Boscombe. We did lots of Fixing including clothes, a clock and a lawnmower! We also signed up some new volunteers and ate plenty of yummy cake! See you all again at our nest event on 15th Oct 🙂 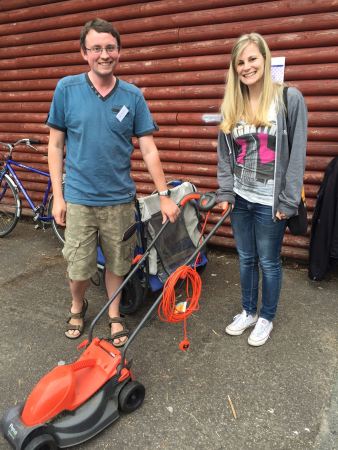 2015 was a busy and enjoyable year Transition Bournemouth. We attended several events and ran a few of our own, launch new project and made great progress with existing ones. Here’s a summary:

Come and join us for some festive food and fun with friendly like-minded people. This event is open to anyone interested in anything green!

We have booked several tables at Zoukinis Vegetarian & Vegan Restaurant in Westbourne for Thursday 10th December from 7:30pm. Downlond the Zoukinis Christmas Menu 2015 then e-mail! BHGreenDrinks@gmail.com to book your place!

Come along to our FIRST Bournemouth Repair Cafe on Sat 21st Nov atBeaufort Community Centre (Beaufort Rd, Bournemouth, Dorset BH6 5LB) from 1pm-2:30pm. We are joining up with Beaufort Give or Take to help you save money and keep your stuff out of landfill!

Get in touch via transitionbournemouth@gmail.com to find out more or to sign up as a volunteer. 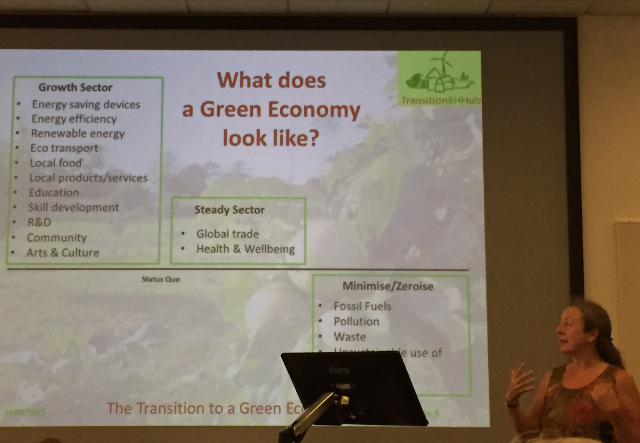 On July 16th Transition BH took the opportunity to present at Bournemouth University’s 2015 Festival of Learning.

Entitled “The Transition to a Green Economy – How can we achieve it in practice?”, the event brought together speakers from Transition Towns Bournemouth and Poole to engage an audience on how we can continue to make our towns more sustainable and enjoyable places to live.

To begin, a video created especially for the event featuring Transition Network founder Rob Hopkins was shown. Embedded below, this outlines the rationale behind the Transition Network and how it has grown from being a reaction to the challenges facing the modern world into becoming a global movement which is rebuilding local economies in sustainable ways.

There was then some lively discussion between audience members and the Transition BH panel as to how we can continue to move the area towards a greener economy. Everything from less wasteful food distribution to online co-ordination of efforts and even ambitious projects like community energy and local currency was on the table.

The Transition BH panel then had an opportunity to present some of their existing and upcoming projects, underlining how much is already being done in the BH area. Attendees had the opportunity to take away flyers and information on many of these endeavours; going by how many chose to we certainly made a good impression!

Transition BH is an “umbrella” group which facilitates communication and collaboration between Transition Town groups around the Poole Bay area.

The PowerPoint slides used in this presentation contain details on contacting us about any of the projects discussed at this event, Click here to download the slide deck.

Slades Farm community garden held its 2015 summer open day on Sunday July 12th. Visitors were tempted by choice plants for sale and yummy cake to learn more about the Slades Farm project and about the Transition BH groups as a whole. 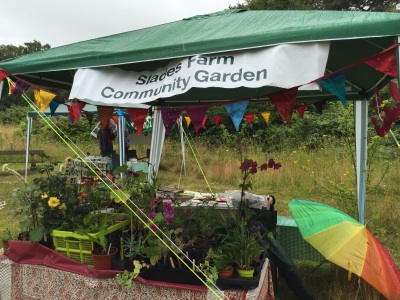 Many people had a look at the pond, and had a go at pond dipping. The new pond was completed in spring and is now a key feature of the garden, with lots of water creatures, like water beetles, water boatmen, damselflies and dragon flies settling in. 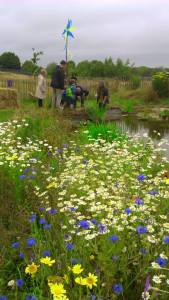 Lots of water snails have mysteriously appeared, and in sunny weather the pond attracts damsel and dragon flies. We have loads of cinnabar moth caterpillars on the ragwort this year, they are the cute-looking yellow and black stripey ones.

Garden plants and home-made cakes were available from the stalls setup for the event. Also provided was a range of information detailing the activities of the local Transition groups, collectively known as Transition BH.

Now in it’s fourth year, the garden is home to several varieties of young fruit trees and a range of vegetable patches containing potatoes, strawberries, beans and many other types.

As part of Bournemouth and Poole Sustainable Food City Partnership’s Good Food Fringe Festival Transition Bournemouth presents: Big Green Quiz 2015 – Food and Drink Special! A quiz for all you green foodies out there! Come test your knowledge of all things culinary including music and picture rounds. It’s £1 per person to enter and teams can have a maximum of six members. The winning team take the pot!